There has been very little research on how many steps people should take a day to be healthy. 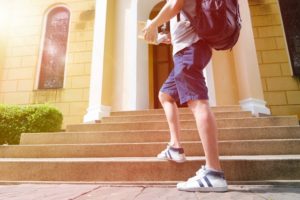 Many people jumped on the bandwagon and bought fancy (read expensive) electronic gadgets that measured the number of steps they took every day when the “10,000 steps a day” fad hit. However, not many people asked who came up with that number as the guideline. Busting the 10,000 steps a day myth, an article in the medical journal JAMA Internal Medicine, says the guideline never had a scientific basis. Apparently, “10,000 steps” was a marketing idea that the pedometer industry created.

“10,000 steps meter” is the English translation of the trade name of Manpo-kei, a 1965 Japanese pedometer. The authors of the JAMA article say that is likely where the 10,000 steps concept originated. There has been very little research on how many steps people should take each day to be healthy. When the companies that wanted us to buy the various wrist gadgets that measure how much we move around told people they needed to walk at least 10,000 steps a day, the general public merely accepted that statement without question.

Of course, you want to be healthy. No one is going to keep track of every step they take manually. If you walked around counting your steps out loud, they would probably send you for an evaluation. You could estimate the steps, but 10,000 steps a day is a large number. It would be inconvenient to map out everywhere you walked every day.

Therefore, people bought the gadgets to count their steps and let them know when they need to get off the sofa and move around. (Bonus myth buster: those devices do not actually count your steps.) Linking those gadgets to entertaining apps and adding features, like tracking your sleep habits, made many people curious enough to part with their money and purchase the devices.

How Many Steps People Need

Researchers at the Women’s Health Study focused on close to 17,000 women with an average age of 72. The women wore accelerometers, which are devices that kept track of the distance they walked and the speed at which they did so.

The study found there was no health benefit, in terms of longer life, from taking more than 7,500 steps a day. You might not even need half of the much-touted 10,000 steps a day to achieve significant benefits. With an activity level of 4,400 steps a day, older women have a significantly lower mortality rate than people who walk about half that amount.

The study found no connection between the speed of walking and longevity benefits. In other words, a pleasant stroll provides just as much health benefit as a brisk walk, jog, or run of the same distance.

The scientists suggested the non-scientific 10,000 steps a day guideline discouraged many people from exercising. People felt the high goal was not attainable, so it made little sense to try something that would make them feel like a failure. We now know the supposed guideline of 10,000 steps a day was a clever marketing strategy with no scientific basis, and that people can improve their health with far fewer steps a day. This knowledge can motivate people to become more active.